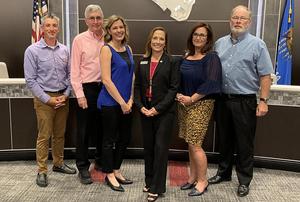 The Owasso Public Schools Board of Education approved the hiring of Dr. Margaret Coates as the district’s new Superintendent by a unanimous 5-0 vote at a special Board Meeting on May 9, 2022.
---
May 9, 2022

OWASSO — The Owasso Public Schools Board of Education approved the hiring of Dr. Margaret Coates as the district’s new Superintendent by a unanimous 5-0 vote at a special Board Meeting on Monday morning.


“Dr. Coates has an “all students first” philosophy,” the Board of Education said in a recent letter to OPS families, employees, and community. “That perspective, combined with her demonstrated ability to develop educational leaders, work as part of a team, listen and communicate effectively, and enforce policies, set her apart from the other candidates. She possesses a set of qualities that makes her a visionary leader with many exciting long-term goals for the district. We believe she will be a dynamic leader of our district for many years to come.”


"I am honored and thrilled to be selected by the Board of Education as the next Superintendent of Owasso Public Schools,” Coates said. “I raised my family here, and this is where I started my career in education. Owasso Public Schools has an outstanding reputation across the state of Oklahoma as a district with a strong academic focus and a supportive community. Even with the district's many strengths, this transition of leadership presents an opportunity for positive change and for the district to be even better in the coming years. I look forward to the work ahead."


Part of that work includes a 100-day plan that will be sent to parents and posted on the district’s website. The plan, which lays out goals for Coates’ first 100 days and beyond as Superintendent, incorporates specific areas of focus with explicit action items separated into two phases. The areas of focus are culture, organizational excellence, connection with stakeholders, academic excellence, innovation, school bond, and strategic planning. All action items will serve as the blueprint to move Owasso Public Schools forward and set the district up for success for years to come.


Coates began her career in Owasso as a geometry teacher at the high school’s West Campus in 2002 before she earned a role as an assistant principal there from 2007-2012. She also coached girls basketball, cross country and track at the high school, served as the Math Department Chair and helped create the Owasso Virtual High School.


In addition to her studies, Coates was a two-year letterwinner on the TU women’s basketball team and was an Academic All-American in 1987. She recently hiked the Pacific Coast Trail (PCT) from Mexico to Canada, has completed more than 20 marathons and will participate in the Ironman Tulsa Triathlon at the end of May.